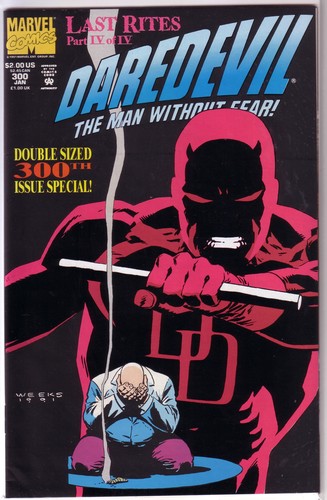 I’ve been collecting comics for almost 2 and a half years, the first comic I received being an issue of Iron Man on my 14th birthday from a good friend of mine. It has been an interesting and rather fulfilling hobby which, as I inform my parents on  a regular basis, has kept me off the streets (mostly because I don’t have a lot of money so I can’t afford to be on the “streets” per say). The 28th of July 2016 marked a small milestone in my comic book collecting: my 300th comic book.

I would quickly like to add, the featured comic book in the image is not the 300th comic book in my collection, it is purely used as it is the 300th issue in the first run of Daredevil (though, as it just so happens, it is number 66 (More alarmingly yet, I only bought it last year… )). The issue that marked the occasion is The Totally Awesome Hulk #9 (which I haven’t read yet as I have to read Civil War II #3 before it and I don’t want to spoil it anymore than it has already been (The Internet is a fabulous place except for when you are trying to remain spoiler-free)). The Totally Awesome Hulk already had a special place in my heart due to having a signed copy of #1 but it now holds even greater value.

Reaching 300 comics is a big milestone for me. I like to think it shows a great deal of dedication to my hobby. It also shows that I might be a little obsessed but I prefer dedicated. Here’s to the next 100!

(As ever, if you have any thoughts or questions on comic book collecting please leave them in the comments. I will answer as best I can.)

One thought on “On Comic Book Collecting: 300”