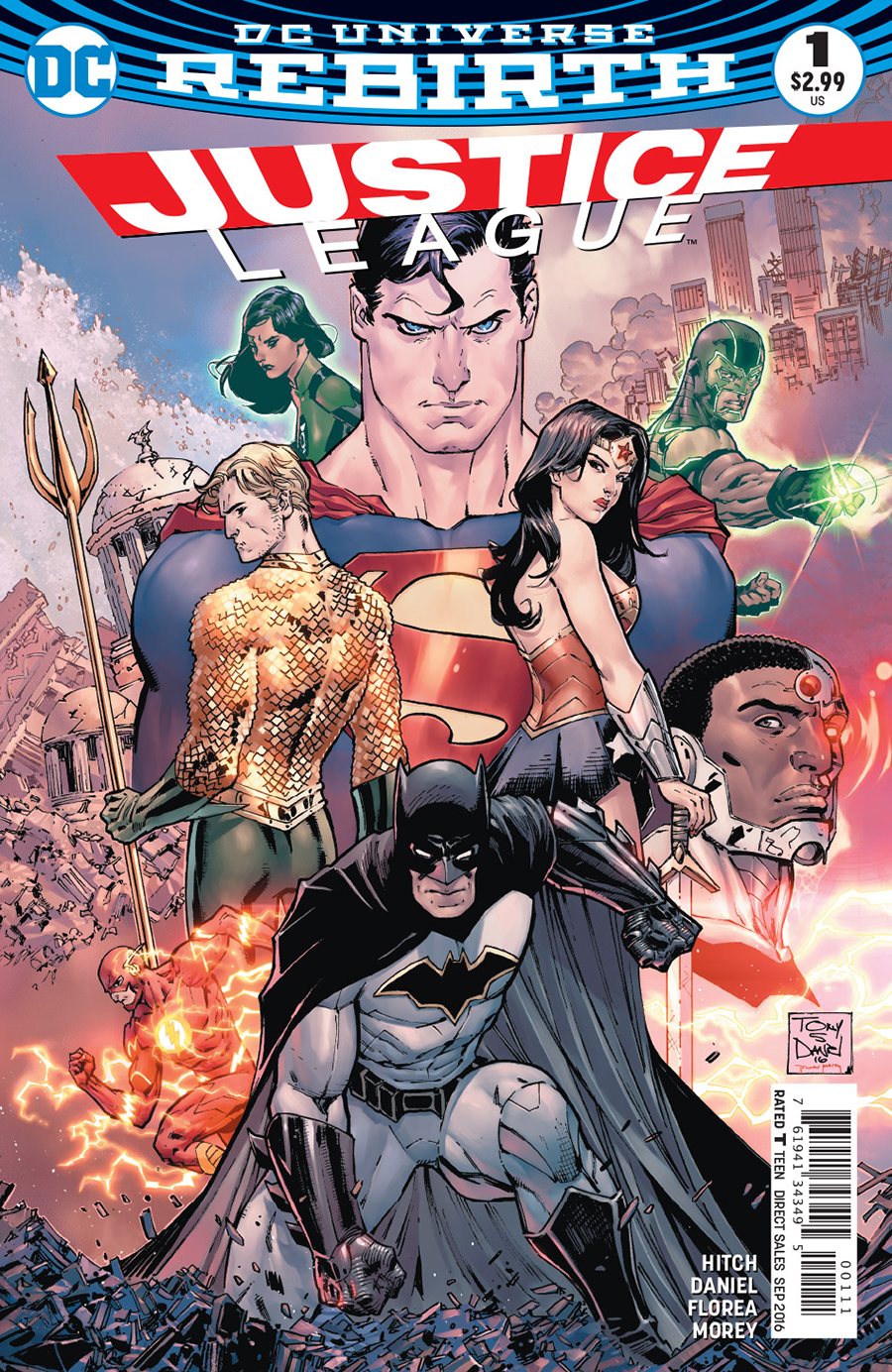 This a tad overdue considering its July release date but we are here now so let’s get started. If you haven’t already read it, I reviewed the one-shot issue that precedes this one and the review of that can be found here: Review: Justice League – Rebirth #1. The long and short of it, I didn’t really enjoy the one-shot and it brought into question my collecting of the title all together (A bit extreme, I know, but with Marvel NOW! starting in October I am on the lookout for a new series or two). I can safely say that issue 1 of the ongoing title has brought it back from the brink.

The issue follows each member (With the Lanterns being the only paired up members due to the nature of their power (A shared power lantern from what I can infer (History skills are finally paying off)) helping as best they can against an apocalyptic number of natural disasters happening at the same time. The might of the Justice League results in many people being rescued and cities remaining mostly upright (Just about). However, the real problem is not the disasters but a mysterious force that takes over the minds of the people surrounding the heroes. They begin to chastise and accuse the heroes, striking at their very core, with short, sharp phrases (All designed to focus on the power set of each hero). Wonder Woman is the hero whom discovers what the mysterious power is. Going by “The Kindred” they are warning of the coming awakening (Sinister, I know).  Our favourite warrior princess scatters the controlled humans (Note: They were killed in a huge earthquake and were also terrorists (Yes, they are zombies)) and returns the threat, warning of the obvious might of the Justice League (Though if I were there I imagine they would be even mightier (My commitment to the Avengers is just too great (Ha ha… Ha…))).

Exciting, enthralling and brilliant. Best words to describe this issue. When I decided that I would collect the Justice League I was expecting something that would really inspire and grip me which I felt the one shot failed to deliver (Though the splash page at the end was pretty inspiring (Noted, I am easily inspired by superheroes (Which may not be such a bad thing))). This issue had a wonderful balance of action and dialogue which both presented (most of) the heroes doing what they do best: Helping people against all odds.

For anyone who might be curious, I have yet to pick a favourite member for a combination of reasons. I went into this book with the Flash and Batman being my most anticipated characters. However, I now look forward to (almost) all the interactions of each character with Wonder Woman and Aquaman rising up in my interest levels. There is something about Wonder Woman that is simply incredible. Be it her spirit, strength or courage she has rocketed into my top 5 favourite DC characters (Which hasn’t been finalised as such (Still relatively early days in my collecting) but she will definitely be up there). Aquaman didn’t have this effect as such but it is more about personal interest. For many years I always saw him as the weaker member of the Justice League who I couldn’t really take seriously (Mostly due to the media micky-taking). However, I find him to be more interesting than he is given credit for and I look forward to seeing his interaction with the League for issues to come.

Superman was a bit of a weird topic in this issue. I don’t read his solo title (As I collect enough series and he isn’t a character I find particularly engaging (Though I have no real experience with him so I should probably gain some information before passing this unfair judgement)) so I don’t really know the full gist of the story but I think he is a more classic Clark Kent (But don’t hold me to that). He wasn’t in the issue very much, popping up doing the usual miraculous feats that Superman does. This does add some interest as to why he is being rather distant and I do look forward to seeing this aspect developed.

Overall, great story and art which has ignited a spark which  (I imagine) will grow when the following issues finally arrive (They are due soon so I’m very excited (I need some sort of escape from school work (Though I do enjoy it a lot more now)).As ever, if you have any thoughts or questions on the issue please leave them in the comments.

In other news: I must apologise for not posting as much as I (sort of) promised to do, especially relating to the physics side of things. My only reason for not posting about Physics stuff is that we haven’t properly started it yet (Though this isn’t really a valid excuse as I’m perfectly capable of opening up the laptop and researching for myself). I’m slowly catching up on the backlog of posts that I want to make (Though my lack of posting suggests otherwise…). If anyone has any requests for possible post topics and stuff they would like me to write I’m more than happy to accept suggestions (As I’m aware Lego and Comics are not quite everyone’s  cup of tea). I’m currently reading From Russia with Love by Ian Fleming (I’ve been gripped with the Bond bug (A tad, I’m not obsessive (I have enough obsessions as it is))) so stay tuned for a review in the (Hopefully) near future.

Other than that, I’m a little burdened with work (As I previously implied) and had a bit of sticky situation involving gum ending up in my hair today (Which then lead to said area of hair being cut off (Let’s just say I’m not going out into town at lunch time  again for a while)). I will try my very best to post as much as possible over the next few weeks so stay tuned.