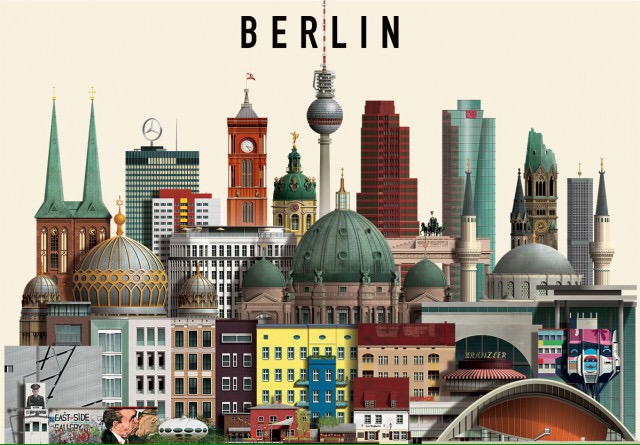 Thursday involved an excursion out of Berlin to nearby Potsdam. Potsdam was one of the places that I wanted to go to from the start, mostly due to the historical significance which, for those who don’t know, was the Potsdam Conference of 1945 where several major decisions were made about the fate of Europe post-WW2.

My parents and I went on a paid tour of Potsdam which, as it happens, was lead by the tour guide from the day before, Duarte, which was great. We started again outside the Brandenburg gate from which we took the U-Bahn to Berlin Hauptbahnhof station, the largest train station in Europe. From there we took a double-decker train (Very cool, I must add) to the Park Sanscousi station in Potsdam. Upon our arrival, as you can guess, the tour began.

Our first stop was the New Palace. Order to be constructed by Frederick the Great, the New Palace was meant to symbolise the strength of what was formerly  Prussia and that it did. It was also a symbol of victory in the 7 year war with the centre piece of the roof consisting of Frederick’s crown held up by the former rule of Russia (Who was very anti-Prussia), the mistress of the King of France and the ruler of Austria. Opposite the New palace were the rather grand servant quarters where servants lived, kept tools and prepared meals. In the winter, servants could pass through a tunnel to the palace as opposed to going overland and running the risk of food getting cold. We then wandered through the palace gardens which were modelled on the gardens seen at Versailles. 18th Century culture was heavily influenced by France and French was the primary language of Europe at the time. Whilst passing through the gardens we stopped outside several buildings. The first was Orangery Palace in which all the garden’s tropical plants are kept in the winter. The next, more interesting structure was a large windmill. The owner was irritated by Frederick’s Sanscousi Palace as it blocked the wind. He complained to Frederick’s servants which resulted in Frederick attempting to get him evicted. This was stopped by the owner pointing out that one of Frederick’s own laws forbid eviction without reason so Frederick dropped the case, proud that people were respecting his code of law. The Sanscousi palace was the penultimate stop in the park. The palace was Federick’s retreat away from the stresses of being King where he could relax and enjoy the company of his friends. He loved the palace so much that he requested to be buried there. However, his wish was not fur filled until 1991, 205 years after his death. More interesting still were the potatoes that rested atop his grave stone. Frederick brought potatoes to Germany and helped many people survive by being able to grow a useful crop. Our final stop in the park was the Church of Peace where several important people were buried. After this we breaked for lunch.

Prior to breaking for lunch, we stopped in front of the first Brandenburg gate which is far less grand than the one seen in Berlin but still pretty impressive. Our second stop in the city was the junction into the Dutch Quarter. Due to the marshy land upon which Potsdam is constructed, Frederick brought in Dutch engineers who had expertise in building on marsh land. The Dutch quarter was constructed to help them feel at home. We then caught a tram and bus to Cecilienhof which was of particular interest to me as this is where the Potsdam conference took place. In the courtyard there is a large star that, when in season, is covered with red flowers in recognition of the fact that it is was formerly owned by the USSR. Our final stop of the tour was the Glienicker bridge or, as it is  better known, the Bridge of Spies! Having watched the film this was a site of paritcular interest again for me.The bridge is, first of all, two different colours as the two ends of the bridge were owned by the western Allies and the eastern USSR. As you can probably guess, negotiations weren’t great. Crossing over the bridge marked the end of tour.

When we got back to Berlin we got off at the Zoological gardens which were located in the former West Berlin, an area we had not yet explored. We went first to the Kaiser Wilhelm memorial church which had been left damaged from when it was bombed during WW2. Then, because I’m very much a child at heart, we headed down the road to the Lego shop where I found myself utterly disappointed. The three-floored shop of wonderment was closed for refurbishments till the end of November. Most upsetting, I assure you. After dinner we then returned to our apartment. If you have any thoughts or questions please leave them in the comments.