Sigh. Well, not going to lie but I’m genuinely rather upset to say goodbye to this series. The strong family feel this series had early on left me feeling very much connected to the team who were, to say the least, solid gold.

I picked up the title almost a year ago (The 17th of December 2015 to be precise) in one of the biggest comic book shops I have had the pleasure of going to, Midtown Comics. I had recently felt a desire to pick a superhero team title to counterbalance the Illuminati title I was already collecting. I had weighed up my options, of which there were many, and decided upon the one with the most classic line-up of heroes. The rest, as they say, is history.

The first arc was, in my opinion, a bit weak. As I think I mentioned in a past post (It might have been about one of my favourite arcs in comics ever, Avengers: Standoff, but I can’t be sure) I’m not overly pleased when films influence comics as I believe it should be the other way round but the series quickly picked up after that. Vision being mind controlled really turned the book around for me as it should the carnage Vision could reek if someone did manage to hack him. It also showed incredibly touching moments between Vision and Ms Marvel (I have definitely said this before but never mind). Avengers: Standoff followed and you can read more about that gem here: Marvel-lous Mumbling: Avengers Standoff. A dalliance in space/ the Negative Zone really brought the team together in wonderful ways and then, as is the way with these things, Marvel’s Blockbuster summer event, Civil War II, shoe horned itself into a perfectly wonderful series which didn’t need to be broken up by war (Though I must say that Civil War II as a title is pretty great (Which you will eventually hear about when the event ends later this month (Hopefully))). This brings me onto the concluding issue: 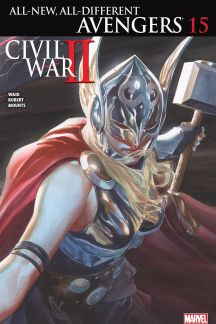 As with a couple of previous issues, #15 took a focus on one character in particular and October was Thor’s turn. In the search of answers, she approaches Heimdall (Gatekeeper of Asgard) who is omniscient to the point where he can see into the future. He recounts a similar situation with Thor Odinson, the previous wielder of Mjolnir, who came to seek guidance on the nature of a massive weapon created by Doctor Doom many years before. Heimdall warned him and the Avengers that by looking to the future the events he saw would be set in stone. He foresaw victory in their battle but not over Doom. They head to battle where they tackle the forces of Doom and Doctor Doom himself. They also destroy the device but, in doing so, release an alchemical radiation that results in the destruction of all the Molynite in Rotruvia, causing a collapse in its economy due to the dependence of the country on the precious metal. Doom is then able to take control in Rotruvia. Heimdall finishes his recount and, as an act of gratitude for Thor’s compliment on his superb teaching methods, offers Thor the chance to see when her severe cancer will lead to her death. She declines, wishing to maintain control of her fate in anyway possible.

A rather disappointing farewell issue, if I’m honest. I appreciate (Well, not really) the need to tie-in to Civil War II but this epic deserves more than a recount of times of old. It’s great to see the Old Avengers in action but I want to see my team, for that is what they are to me, in action together. One last time.

Anyway, I had best wrap this up. All-new All-different Avengers is, in effect, the team that I will hold dear as my first real comic experience with the Avengers on a long term basis. Its volume holds my first published letter to Marvel as well as being my first superhero team book. It’s safe to say this series will be treasured by me for a long time after this post.

Farewell Avengers, thanks for one heck of a ride.