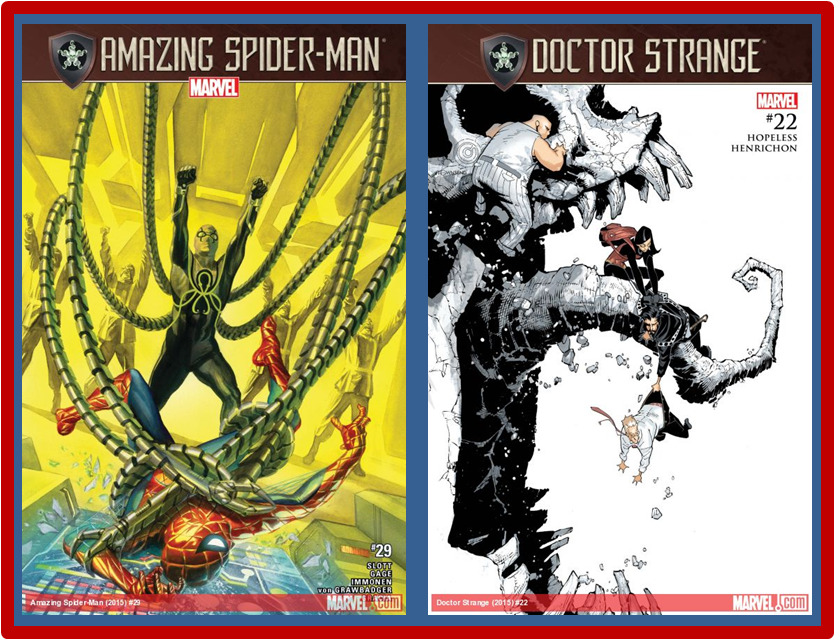 Last but not least, the tie-in issues from my ongoing series. This month we see Spider-man join the fray and things definitely aren’t looking peachy on his end. The same can be said for Doctor Strange. Life in Manhattan is getting worse by the day.

I’ve been excited to see where Slott was going to take the Superior Doctor Octopus and he’s done a marvellous job. Though this does tie into Secret Empire it stands rather well as a continuation from previous events. Otto’s plan to bring Parker to his knees promises to be interesting and his new bag of tricks should offer fresh challenges to Spidey. I’ve always liked Doctor Octopus as a villain so his involvement in a Secret Empire tie-in is a win-win.

Whilst Otto was great, Spider-man was fantastic. This issue was full of quips that I think have been missing the past few months. I will confess to soft chuckling (Anything louder would disturb my family’s slumber) on a number of occasions, a rare sight with anything remotely related to Secret Empire. It was also great to see him get so riled up over the trouble his friends  now face. At least Aunt May is out of the fight.

Immonen continues to deliver brilliant art. He captures facial expressions so wonderfully and with all the crazy stuff going on right now, reactions are a key part of just about anything Secret Empire.

Hopeless continues to deliver an exciting tale of life inside the Darkforce. I’m only just getting over the whole alliance with Kingpin, it is terribly exciting. His connections with the magical world raises a few questions to say the least and his actual use of a magical item teases some interesting consequences (Wilson Fisk: Sorcerer Supreme (Now that would be weird)).

Much like the main event, we see another example of power struggles amongst the Hydra leadership. Mordo’s rebelliousness poses a number of challenges to Captain America and I’m curious to see how that unfolds in the next two issues. Only time will tell.

Henrichon continues to deliver stellar art work yet again. His monsters are disgustingly awesome and his style in general just works so well with the content. I’m glad that he is carrying on post Secret Empire (Even if it is only for a little bit).

Champions is the last of my ongoing series tying into Secret Empire and that kicks off next month. This month delivered some great tie-in issues that provided great stand alone stories but also added to Secret Empire as a whole. If you have any thoughts or questions please feel free to leave them in the comments.