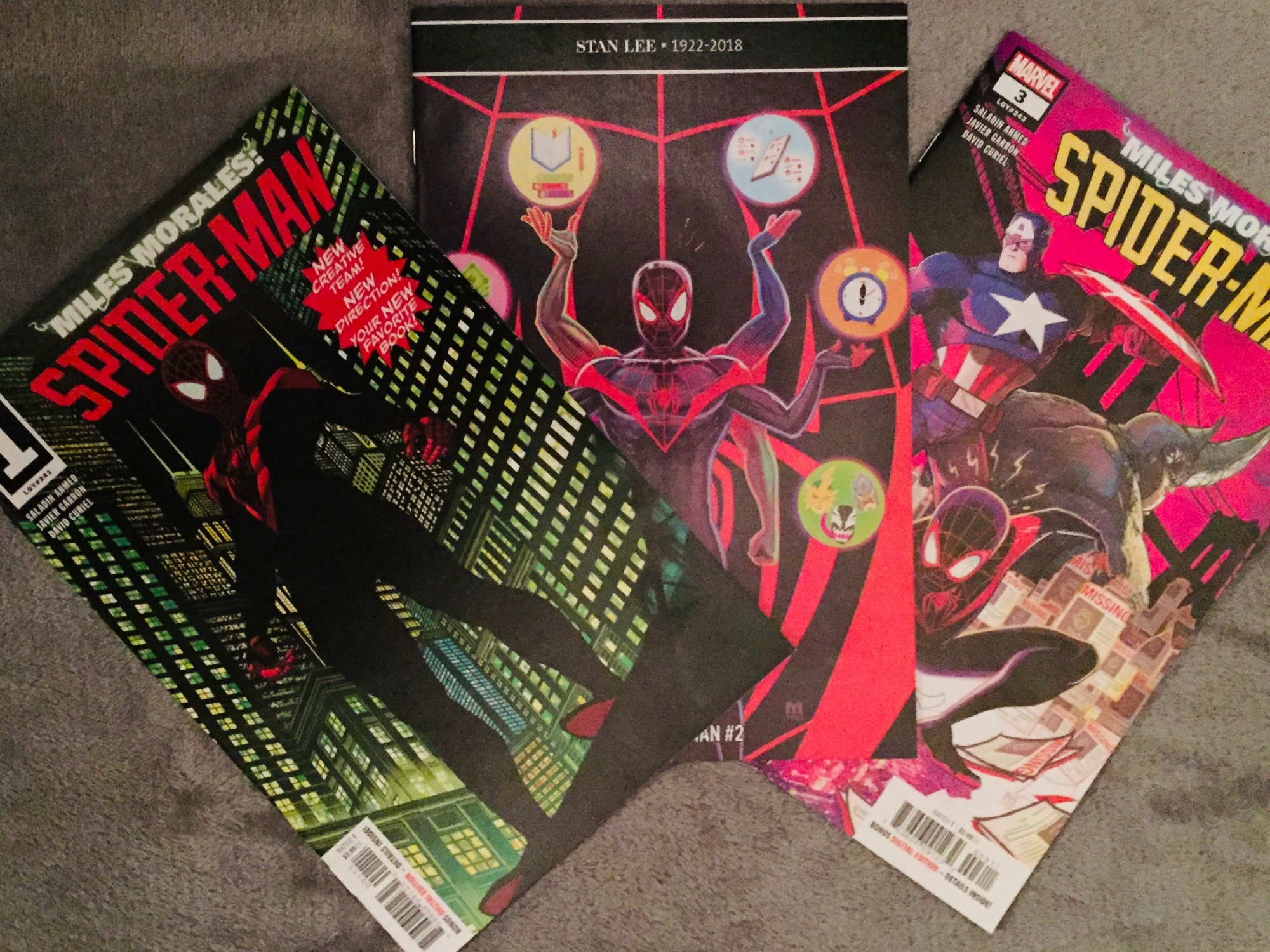 I should start by stating what I suspect is becoming apparent; my comic book hiatus has not lasted as long as I anticipated. This is in part due to the convenience of having a brick and mortar shop a mere 5 minute walk from my halls (A wonderful experience I’m not sure can truly be encapsulated in words). It was also driven by the absolutely phenomenal animated feature that holds the top spot as my favourite Spider-man, if not superhero, film (A topic which I honestly have nothing to say that hasn’t already been said. Watch it, if you haven’t already). But as I sat down to write this post (for the 4th time…) I realised that main reason for picking up a monthly title again (Which obviously hasn’t escalated…) was that I desperately missed Earth-616. It had been my home away from home for the past 3 years and, whilst my time at uni has been excellent, the feeling of longing became all the more apparent when I physically moved to a home away from home.

Miles’ solo title took precedence for a number of reasons. The first was that I am a big fan of the Spider-Family. The web-zipping, spider-sensing adventures of this particular subset of heroes have never ceased to excite and amaze, in part due to a least the kernel of realism that I feel exists in their abilities. With that mind, Peter Parker would seem like the more obvious choice but, as mentioned previously, I have yet to find myself able to embark on Peter’s new adventures under the guidance of Nick Spencer. As I began to give it more thought, it suddenly clicked that Miles was perhaps the perfect successor (Though Ghost Spider/ Spider-Gwen is definitely someone else I want to follow more actively). I’d met Miles previously but only as part of a larger team or guest star in other character’s solo titles and the larger “blockbuster” events.

I was in the fortunate position of Miles’ title being taken over by a brand-new creative team after Brian Michael Bendis extraordinary 240-issue run on the character. I appreciate the similarity in these two situations but in this case I benefitted from having a fairly limited experience with Miles on his own, making this fresh jump-on point all the more exciting whilst I’d made a rather powerful connection with Slott’s take on Peter over the years spent with him leaving me reluctant to follow the new creative direction immediately (Though I fully intend to, I have the first trade paperback ready to read).

Saladin Ahmed is a writer I wasn’t super familiar with prior to reading Miles Morales: Spider-Man. It’s safe to say I’ve been missing out. Considering the Miles’ rich history under the creative eye of Bendis, Ahmed hits the ground running with an entertaining, often touching first arc involving kidnappings, team-ups and responsibility juggling.

It was great to see Miles on his own as I could appreciate him as an individual. Whilst he was always great as a part of a team dynamic, I didn’t really feel as strong a connection to him as I did with others, most notably those whose title’s I followed individually (That being said, I remember there being a powerful exchange between Miles and Sam whilst the Avengers were in space back in ANAD Avengers). It was great to have the spotlight firmly on him, showing his take on balancing super-heroics with everyday life (Always a treat). Getting to know Miles has been a refreshing experience (Though admittedly that is kind of the norm when starting out a new series).

The use of Rhino was another resounding success. I am a sucker for redemptive stories and this was a cracker. In this case, it helped add a more sensitive side to his brutish appearance. There were a number of touching conversation between Miles and Aleksei. Captain America’s role was as expected, the sage advice giver and staunch ally in the face of evil. It could just be me but I still find Cap and Miles’ interactions a little weird considering what went down (Or didn’t, I suppose) in Civil War II. I’m glad that they’ve been able to move past it but it still feels a little strange personally.

As with Ahmed, my experience with Javier Garron was rather limited prior to reading these issues, the only thing I can think of being Inhumans VS X-men (An engaging take on the good ol’ hero-vs-hero plot-line). He did an excellent job bringing the story to life, providing an excellent level of detail that made the story all the more immersive. He is able to capture Miles’ emotions incredibly well considering the mask, making the more poignant panels all the more powerful.

The covers thus far have also been great. Brian Stelfreeze delivered a strong opening gambit with #1, illustrating a striking portrait with Miles with an excellent colour scheme. Marco D’Alfonso was in charge for #2 and #3, delivering to brilliant, colourful covers. I personally preferred #2’s cover of the three but that was in part driven by the relatability (Minus the bubbles ascertaining to romance because ha ha… ha… or combat with super-villains as, oddly enough, I don’t think the PS4 game counts).

I’m not entirely sure how I feel about not having Peter as a regular part of my pull list but Earth-616 is a big place, and Peter isn’t going anywhere. I’m excited to go on new adventures with Miles, hopefully getting to know him as well I like to think I’ve come to know Mr Parker. Regardless, I intend to stick around for a while and enjoy what is promising to be an excellent ride.

Have you been reading Miles Morales: Spider-Man? Have you been enjoying it? Any recommendations for other Spider-Characters I should check out? Let me know in the comments below!

One thought on “Miles Morales: The Obvious Next Step”